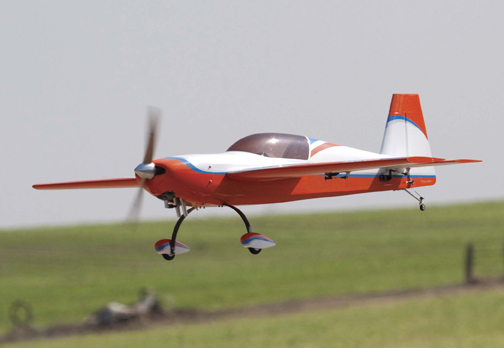 Getting into gassers is “Extra” easy with this quick-building aerobat!

Aeroworks has quite a few sweet-looking models on its website (the airplanes, guys) and after reviewing the 30cc Edge, I couldn’t wait until its 30cc cousin, the Extra 300 was released. Rather than do a complete comparison of these two aerobatic platforms, I would like to focus on the Extra in its entirety. A large chorded 74-inch wingspan and a 65-inch length should allow for some great tumble action while keeping with the stability that we’ve come to love when flying larger model airplanes. Constructed from laser-cut balsa and ply parts and wrapped in UltraCote, the catchy color scheme applied to the Extra is easy to orient.

Aeroworks is at the higher end of ARF aircraft production so its airplane kits go together without issue. The included components are high quality such as a carbon-fiber landing gear, carbon-fiber wing and stab tubes, and painted fiberglass cowl and wheel pants. The hardware pack is SAE and is of equal quality; I’m talking about adjustable ball link-ended pushrods with centering nuts, double metal control horns, and socket head screws with nylon lock nuts. A small wrench is even added so you can make all needed adjustments anywhere, anytime. This high-quality, high-performance aircraft is definitely aimed at those with plenty of experience and requires a slightly higher level of respect while building and flying it as compared to smaller and/or less advanced airplane designs.

Large wheels and tall gear allow you to roll off of almost any reasonable surface. The 19*8 prop is an ideal match as it spools fast and puts out plenty of thrust. Roll on the throttle and the tail comes right up and a little rudder input keeps the Extra on track during its short departure. Once you break ground and rotate, you can climb out at any angle. On the first flight, I made my first turn and went right into a knife-edge pass because this plane makes one feel completely confident from the start. Landings are easily accomplished as the plane comes in almost like a foamy; it finds a shallow sink rate and just seems to float back home on its own.

Stability: With a wingspan of 74 inches, the Extra is “big” yet flies like a giant-scale aerobat. An immediate feeling of constancy will enter your thumbs when it goes up and this permanence will remain even after the plane touches down. Even in a breeze, it does not buffet around like smaller models do and actually seems to welcome a little wind.

Tracking: A brief trim out yielded a perfectly pointing airplane; you can point and shoot it wherever you want and it will go there. This is another advantage of this model’s design and size as it penetrates the air quite precisely.

Aerobatics: I have flown the Extra in some 20 knot winds and it does very well. High-alpha rollers are doable in place; meaning there is almost no forward movement while the plane is twisting at a 45o or so attitude. Knife-edge at the same angle allows for some low tail-to-tarmac passes. Any 3D or pattern type of maneuvers can be executed if your thumbs know how.

Glide and stall performance: I mentioned a shallow sink rate earlier and here’s why: When power is cut to idle, it seems to just float along, maintain responsiveness, and holds its position. A power-off stall at low speed will lead to mushy sticks and I power back up before anything else can happen.

This is definitely a higher-end product aimed at the newer size niche (30cc) of aerobatic flight. I found the Aeroworks 30cc Extra 300 easy to build, transport, fast to assemble at the field, easy to see in flight and capable of any intense maneuver I could throw at it.

I added washers for spacing and load distribution at the firewall. Foam padding isolates vibrations from the ignition and battery.

As part of the popular QB or quick-build lineup, the 30cc Extra can be completed and ready to fly in as little as 8-10 hours. To be honest, I’ve worked on over 100 ARF model aircraft and not always does a model build in the time specified in its instructions. Aeroworks is one of the few exceptions to this rule. This is due to the fact that the parts all fit perfectly and all hardware holes are pre-drilled. Add in that the hinging is all completed for you at the factory, the engine box has already been fuel-proofed, and there are mounting templates for the popular propped power choices in the box. Line one of these templates up to the firewall, mark the holes, and drill away; it’s pretty much foolproof.

The tinted and painted canopy is huge and allows for plenty of hand-room during building/servicing. Two polished fasteners keep it in place during flight and I find that a ball-end hex wrench works well on those. The wings are held to the fuselage with larger bolts and washers along with backup clips, which fit into the wing’s aluminum anti-rotation pins. This means that the wings are staying put no matter the maneuver. The stabs are stuck on with two bolts apiece which is cool because I don’t have to mix epoxy and worry about any incidence or alignment issues. I ended up using a pair of 24-inch servo extensions as the Hitec servos already had a good 12 inches of wire length. Make sure you secure your extension’s connections with twine, shrink tube or the neat little servo safety clips and keep said wiring away from the pull-pull rudder cables with a couple small wire ties or similar.

The fuel tank kit has fittings for gas or glow fuel and with gas, definitely tie off your fuel lines inside of the tank and out. I also tie the fuel line connection to the carburetor to keep it from detaching in flight, all of which is just more cheap insurance. As for the finishing touches, the predrilled fiber-glass cowl is a thing of beauty. Cutting into a cowl always hurts, so I looked to JTEC who makes mufflers to order. Their wraparound Pitts style bolted right on and lessened my cowl cutting by 50 percent or so as well as lowered the engine decibel levels some. The results are well worth the investment.

CUSTOM MADE TO ORDER

When you build a high-quality aircraft, it only seems sensible to outfit the model with the best equipment you can get. Specialists are out there and are listening to pilots, taking orders, and bringing us some really cool items.

Spark switch: This small (22gram) electronic device simply plugs into an open receiver channel, into your ignition and battery. While weighing less than comparable offerings, it gives the pilot the ability to safely cut the ignition to a gas-powered engine if necessary. I recommend always having a kill switch of some kind on large models and this one is killer!

Muffler: JTEC custom made a wraparound Pitts-style muffler for my DLE 30 engine which paid off in two ways as previously mentioned. They make mufflers per order, per specification, which means you can give dimensions and get a product custom fit and tailored to your model. (jtecrc.com)

Spinner: TruTurn is well known and regarded by modelers and here’s why: In my case, I’m not much of a metal worker so I asked them to make me a certain diameter and style of spinner cut for a certain propeller, which was to be mounted to a certain engine. What arrived was a gorgeous, perfectly balanced, drilled, and cut spinner-which is what the Aeroworks Extra deserved. (tru-turn.com)

A large interior access makes working in the fuselage areas nice. The pull-pull rudder system was easy to set up and adjust. A 7-channel receiver (we used a Spektrum AR7000) is all you need.

I added Hitec digital servos to compliment the plane’s ball-link-style hardware that was included in the kit. Huge double-bevels allow for extreme throws and endless possibilities.

As stated, these QB kits really do build quickly and depending on your pace, you could likely finish it in a weekend. If you are new to a plane this size I’ll tell that there are no difficulties in completing this Extra; just know that you’ll need a slightly larger work area and maybe a work stand to make things easier. Use your best equipment, especially the servos and you will be rewarded with an awesome flying aerobat.